LawnMaster Classic leader Michael Hendry could see the irony of his scrambling 8-under-par round of 64 on Thursday afternoon.

It was just 24 hours after the Japan Tour professional toppled out of the Horizon Golf Shootout on the first hole.

"That's a great example of what golf is like," he said. "To miss out on the shootout and come out and shoot a score like that.

"I really did putt well. It was pretty hard out there, the wind coming from a tough direction."

It was a 15kmh south-easterly.

NZ amateur Tae Koh, the Australian amateur champion, looked sure to be the overnight leader with his 7-under 65 because morning rounds like his traditionally hold up.

But Hendry wasn't having any of it. He had nine birdies, eagled the par-5 14th and had three bogeys.

"There was some very sound iron play because I found myself under a few trees.

"I put myself in positions that when I had a bad hole I could keep my nose clean when I wasn't playing my best."

So he was tickled pink opening with his four-under-par 68, six birdies and a double bogey on the 10th.

"It's a good start to the tournament," Munn said. "It was about getting comfortable out there at my home club, home town."

He did win the 2011 LawnMaster, the amateur version. Otherwise he has usually got off to halting starts.

Munn and Koh have a big schedule ahead, the NZ strokeplay at Paraparaumu Beach, the NZ amateur at Titirangi and the Akarana and Muriwai Charles Tour events. Munn has won two Charles events and wants to make it three before he turns pro.

The LawnMaster might be one for the Kiwi Asians after Sam An won the $13,000 shootout on Wednesday; he had a two-under 70 on Thursday. Koh finished with an eagle and two birdies, bettering his previous best at Hokowhitu by three shots.

The round, nine birdies and two bogeys, by the 20-year-old Manukau Golf Club player equalled his best tournament score.

Golf has been his fulltime work after he left Rosehill College in Papakura.

"I'm from the same school as [All Black] Kieran Read. Hopefully I can emulate him."

After missing the cut at the NZ Open where he "holed nothing", his putter was pinging yesterday. He sank a giant 15-metre putt off the fringe on the par-3 eighth.

Experienced pro Mark Brown was in touch at 4 under after five birdies and a bogey.

"I hit every tree in the back nine to start off," he said. But as pros do, he knocked over the par 5s.

As a Shandon amateur he won the LawnMaster in 1993.

He will play up to 18 tournaments in Australia and One Asia before the European Tour qualifying school.

* Wellington's Julianne Alvarez (71) led the 21-woman field by a shot from Alanna Campbell (Omanu), with Levin's Brydie Hodge on 73. 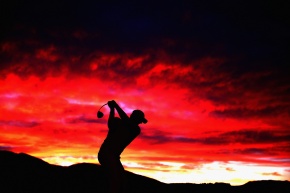