New Zealand have positioned themselves nicely after the opening round at the 56th World Cup of Golf in China.

The Kiwi pairing of Mike Hendry and Gareth Paddison combined for a six-under par 66 in the first round of fourballs on the Blackstone course at Mission Hills golf resort yesterday, putting them in a share of 10th spot in the 28-team event.

They are five shots adrift of leaders Australia, who sizzled with a 61, but just three off second spot in an event which lends itself to dramatic swings because of the wide range of scoring.

The New Zealanders, who had to qualify for the event earlier in the year, had four birdies while Hendry knocked in an eagle at the 16th in a solid opening round.

The Australian pairing of Brendan Jones and Richard Green carded a stunning 11-under total to lead by two shots from Ireland and Scotland, having fired in seven birdies and two eagles, both of which came among an inward nine total of 29 on Hainan Island in southern China.

The pair finished in a share of third place in 2008 for Australia, who won the last of their four World Cup titles in 1989.

Ireland's pre-tournament favourites Rory McIlroy and Graeme McDowell, the last two US Open champions, made a strong start with seven birdies and an eagle, while Martin Laird chipped in twice in the last three holes to move into a strong position alongside Scottish teammate Stephen Gallacher.

McIlroy and McDowell represent their native Northern Ireland as individual players but Ireland in team events. They were runners-up in the last edition in 2009 to Italy's Edoardo and Francesco Molinari, who currently have a share of 19th place.

The format is two rounds each of foursomes and fourballs. Today's second round is foursomes with players hitting alternate shots. 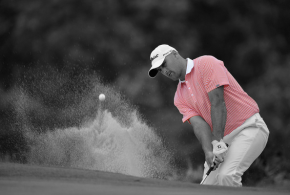