Hendry ready to take on the world

North Shore's Michael Hendry was looking forward to taking on the world after defending his NZ PGA Championship title at The Hills, near Queenstown, yesterday.

Hendry will play in this week's WGC-Cadillac Championship in Florida - which features the best players in the world and a $1.8m cheque for the winner - full of confidence after beating Australian Scott Strange in a playoff last night.

''To retain the trophy is great, because you sort of come into the week thinking 'this is my trophy, I'm not going to give it to anyone else''. I had that attitude all week,'' Hendry said.

Having lost two recent tournaments after leading at the 54-hole stage, Hendry was a relieved man when his 12-foot birdie putt rolled in on the first playoff hole.

He became the first player since Frank Nobilo in 1987 to defend the NZ PGA title and joins a list of multiple winners which includes names like Sir Bob Charles, John Lister and Kel Nagle.

''It's pretty awesome if people are going to put my name with those guys. One of my goals is to be regarded as one of New Zealand's best when I hang up the boots and hopefully I'm on the way to doing that.''

Earlier, Hendry had shot out of the gate with three straight birdies to begin his round, while Strange, third overnight, came from a shot further back with six birdies in the space of seven holes from the ninth to the 15th.

''I came here on an invite, so I wasn't even in the tournament a few weeks ago,'' Strange said.

''Obviously something clicked this week and I started holing a few putts and all of a sudden you are in contention.''

He also claimed a share of second place with Sir Ian Botham in the pro-am tournament, along with just over $56,000 for his runner-up finish.

He scrapped his way down the stretch with some superb recovery golf from the 16th to force the play off with Hendry, who was playing in the next and last grouping of the day.

The pair finished on 19 under, equalling The Hills' tournament record set by American Alex Prugh at the 2009 New Zealand Open.

Overnight leader Rohan Blizard had a day to forget.

He struggled to get anything going after two bogeys on the front nine and his one over round saw him slip to a share of fifth place.

Josh Geary carded a 66 on the final day to claim a share of third place with fellow New Zealand Gareth Paddison, four shots behind Strange and Hendry.

Geary had five birdies and an eagle on the par five 13th, while Paddison, who had started the day tied for sixth, suffered a back nine disaster after six birdies in the space of seven holes had him in the outright lead.

He dropped four shots in as many holes from 12 through to 15, including a disastrous double bogey on the 13th after hitting his ball behind a tussock.

Steve Alker carded seven birdies on the way to a 66 which lifted him into a share of eighth place, while Greg Turner celebrated turning 50 recently with a solid round of one under which gave him a share of 14th and no small amount of confidence as he eyes a place on the European seniors tour.

Professional Michael Long and retired construction company chief executive Chris Hawkins won the pro-am section of the tournament by one shot with a score of 18 under. 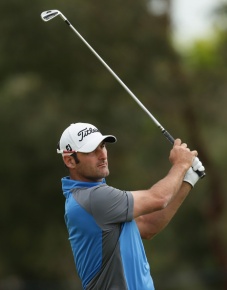