Injury will not stop Hendry

Michael Hendry has injured his back but is confident he will play in next month's New Zealand Open.

The Kiwi has a bulging disc in his back, which he picked up in the gym on Monday morning. While it seemed bad at first, he is recoovering quickly and is hoping to be at next week's WGC-Mexico Championship. That is good news for fans who are hoping to see him in action at the Open in Queenstown a week later.

''I've got to go Mexico on Sunday for the WGC-Mexico Championship, which is obviously one of the biggest tournaments in the world. So just really trying to focus on getting myself fit to play that.

''I'm confident I'll be hitting balls tomorrow in some sort of capacity and, hopefully, by the time I fly out by Sunday evening I'll be back to 100%.''

He had been undergoing treatment since the injury occurred and had done some putting and slow swings. While his back had felt stiff during those swings, he was hopeful he would be able to hit some balls at 50% capacity today. He said one positive was that he had not injured himself swinging a club.

''Hopefully, the movement of swinging a golf club won't aggravate it once I feel like I'm capable again, which is getting pretty close.''

Hendry was in Australia last week, having played tournaments in Victoria and Perth. While his results of 15th and 55th were below his expectations, he felt his game was improving. 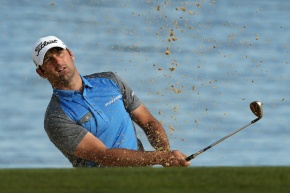