PATTAYA, Thailand – Michael Hendry may have stolen the OneAsia limelight at the Indonesia Open last month, but his approach to this week’s Thailand Open will remain calm and focused.

The 30-year-old New Zealander has spent the past weeks in North Harbour renovating his home. Work on the four-bedroom nest, which started in May, is due for completion soon.

“Winning the Indonesia Open somehow seems like a lifetime ago,’’ Hendry said. “The euphoria of winning has settled, and I’ve only played one pro-am since, so I’m a bit underdone at the moment, to be honest.’’

Nevertheless, he’s sure to be among the favorites when the Thailand Open debuts Thursday on OneAsia at Burapha Golf Club, with a prize purse of US$1 million.

“I have no expectations for the tournament,” he said. “I just hope to make the cut and maybe finish in the top 20. There are a lot more OneAsia tournaments coming up, so it’ll be nice to just get back into the game and have a few light weeks of playing as I gear up for the rest of the season.’’

Hendry’s sporting career started in cricket, where he played for New Zealand’s under-19 team and later represented Auckland. But he opted to focus on golf and turned professional in 2004 at 24.

His breakthrough victory in Indonesia earned him US$180,000, his biggest win to date, propelling him nearly 300 spots on the Official World Golf Ranking after finishing seven shots ahead of Liang Wen-chong.

Hendry will tee off with Liang once again this week.

Hendry’s wife, Tara, a travel consultant by trade, accompanied him to Pattaya to caddie for him. Hendry said his wife, a marathon runner, will make for a great companion during the tournament. 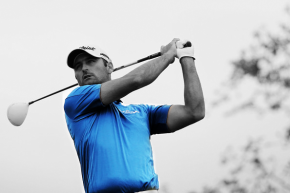