Time for NZ Open 'to soar'

With New Zealand’s top golfing event on its doorstep, Arrowtown is throwing a party and everyone’s invited.

The main street will be closed, bands will be rocking, the flame performers will be there and fantastic local food and drink will be available on the night before the NZ Open gets under way at The Hills and Millbrook golf courses.

Adding to the fun will be some of the golfers and celebrity golfers joining in and, of course, it’s never a party in Arrowtown without the Buckingham Belles and Miners Band kicking things off.

Six-piece band Red Entertainment, which is packed with local stars including Margaret O’Hanlon, Nigel Hirst and Charlotte Graf, will be on the stage until dark, promising to play lots of crowd pleasers.

And everyone can get there – a bus will be carrying passengers from the Station Building in central Queenstown at 5pm to Arrowtown and returning at 10.30pm.

Organiser Julie Hughes said it was a chance for everyone to be part of the event.

‘‘We want it to be a fun community event as well as welcoming all the visitors and volunteers.’’

The family friendly event was free to join. BYO alcohol is prohibited.

One of the pivotal players in the reinvigorated New Zealand Open reckons the time is ripe for the tournament to soar.

Winner of the last two NZ PGA Champs at The Hills, Michael Hendry, said the momentum and backers behind the Arrowtown tournament, which tees off late next month, had reached a level where it was well on track to becoming an internationally renowned boutique golf tournament.

‘‘There’s a lot of factors that go into making a great tournament but one of the key signs is what the players are talking about it at other events around the world, and there’s a lot of great players that are wanting to be here to compete,’’ he said.

Key to creating that buzz amongst top pros was the drawcard of Queenstown and the great reputation of Sir Michael Hill’s The Hills golf course, home of the tournament, as well as Millbrook, which serves as satellite tournament course.

However, player buzz was not enough to compete with the huge money and prestige tournaments being played around the world, at around the same time.

‘‘So many of the top-tier players are wanting to fight it out for PGA titles up for grabs around the world during this time of the year, which means the NZ Open has to work on a different level. I think in terms of uniqueness and that boutique quality the [NZ] Open is really getting up there and has got so many years to further develop what it already has.’’

Getting more top Japanese pros into the tournament was a sure sign that the all round quality of the event was becoming an international drawcard, Hendry said.

‘‘Last year Toshi Muto played and has been saying great things about the tournament, and I know he can’t wait to get back.’’

This year 10 Japanese pros from the lucrative Japan Golf Tour will join Muto, who returns after taking part in last year’s NZPGA Championship - a previous incarnation of the Arrowtown tournament which has upped the ante this year.

‘Getting the celebs here is a big thing, and really opens up this golf tournament to non-golfing spectators. The sculpture installations around the course, the music and entertainment and food and wine really means that its an event, and its important for golf to step out of its usual bounds sometimes.’’ 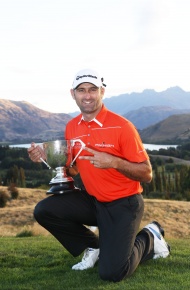